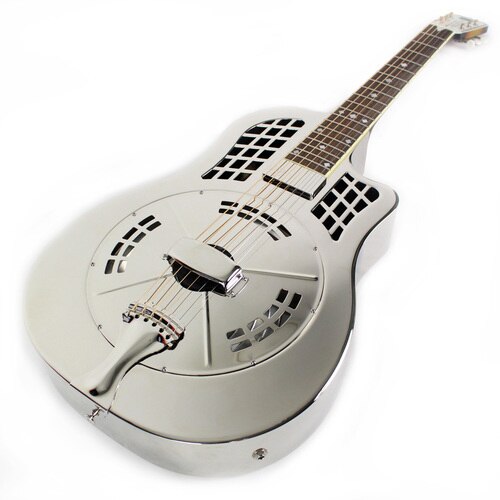 The secret is out: Krivo Pickups is pleased to announce an exciting partnership with the Legendary National Resophonic guitars. All of National's Slimline pickups are now personally handmade by myself, Jason Krivo Flores, here at Krivo Pickups in Portland, Oregon USA. The new improved Krivo Built Slimline™  pickup for resonator instruments is a proprietary design by Krivo but made to National's exacting tonal standards and optimized for their unparalleled resophonic instruments. I have a small quantity of prototypes I built for National on sale direct from Krivo Pickups for only $199.99 (regular price $245) while supplies last. They are identical to the Slimlines sold direct from National Resophonic (and their authorized dealers) except these lack the ability to bend the cable back and install permanently and do not come with the fancy metal case. Additionally, these Krivo Limited edition sale pickups—like most Krivo pickups: mount with finish-friendly putty, whereas National's mount with double-sided tape.

The Krivo-built Slimline features an integrated endpin-mounted female Switchcraft 1/4" jack: Just hang on your strap button and plug in a standard guitar cord. The pickup installs and removes in seconds.
View 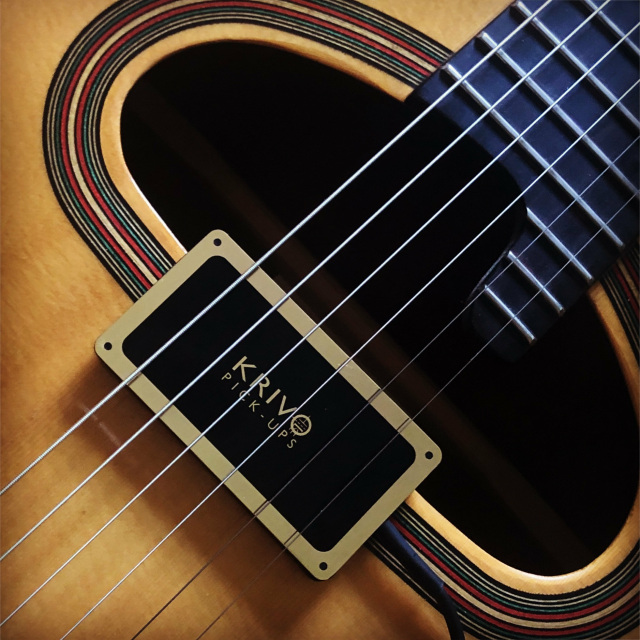 This is not merely a "gypsy" pickup: my highly versatile (only 6mm thick) Micro-Manouche humbucking pickup has become a favorite among archtop jazz players, acoustic guitarists, reso and dobro players and is even used on niche instruments like the, cigar-box guitar, the Indian veena and balalaika! Endorsed by professional players like Robin Nolan, Ghali Hadefi, Benji Nini Winterstein, and Will Dickerson. The Micro-Manouche is exceptionally well-balanced and works with all metal strings: phosphor-bronze, nickel, Monel™ and Argentine (silvered copper) strings. It's truly a UNIVERSAL pickup. 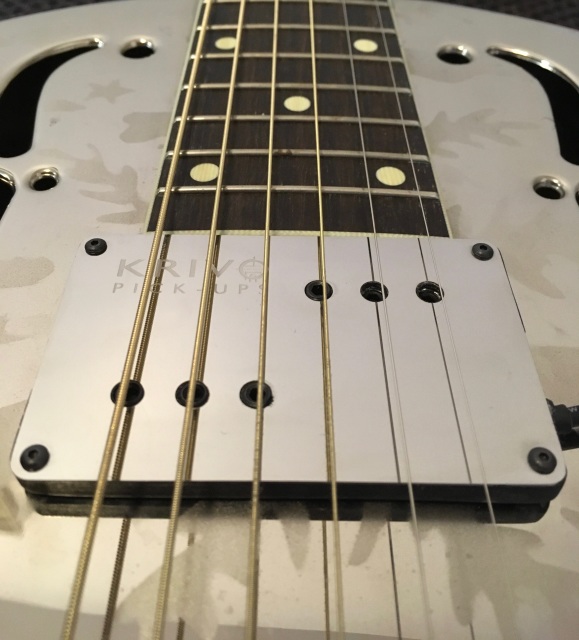 Great with both Phosphor Bronze or Nickel Strings (or any metal string in fact), this amazing pickup is only 6mm thick and installs and removes in seconds. The Krivo Humbucking Pickup for Resophonic Guitars is optimized tonally and aesthetically to suit both metal and wood-bodied resonator instruments including squarenecks, single cones, tricones, and dobros. My proprietary ​Optimized Microphonics winding technique faithfully captures the sound of your particular instrument. No preamp is necessary, just plug in to any guitar or acoustic amp, or via a direct-box straight into a P.A. system. The pickup mounts and removes effortlessly with included finish-safe putty and the 1/4 female jack conveniently mounts to your endpin strap button: just plug in a standard guitar cable and you are ready to play! Chrome/silver Finish 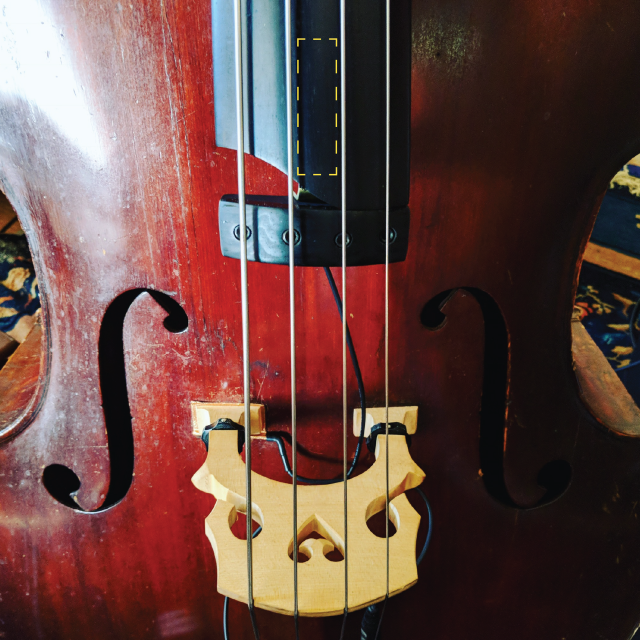 ON SALE: The Krivo Pickup for Upright Bass

Please note: the new mounting system is NOT able to be retro-fitted onto older versions of the Krivo pickup for upright bass: the new pickup is structurally reinforced internally and the housing is enlarged to accommodate the new improved mounting system.

As always, the Krivo pickup for upright bass is fully adjustable for perfect string balance and my proprietary Optimized Microphonics™ technique results in a surprisingly "acoustic" sound. Please remember: you must use steel-core strings for any magnetic pickup to work properly. The Krivo also excels on electric upright basses (EUBs). 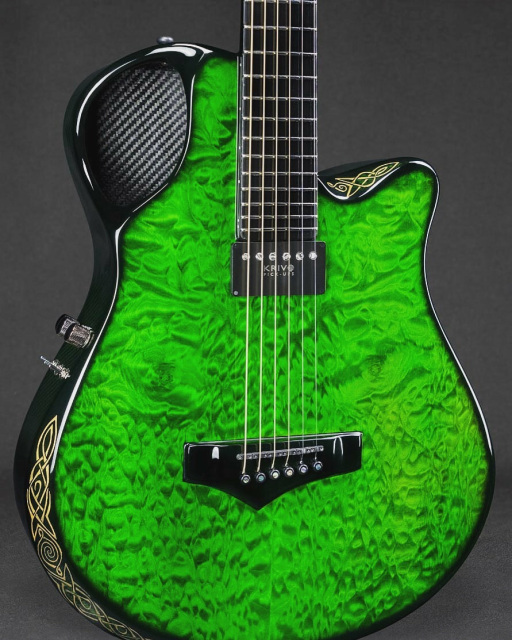 Formerly available exclusively on select guitars by fine builders such as Emerald and Fibonacci Guitars, my Micro-PAF humbucker is the best-of-all-worlds. I've taken the best design elements from my Micro Manouche and Micro-Stealth pickups and created one pickup to rule them all. It combines the adjustability, warmth, and grit of the PAF with the clarity and unparalleled string-to-string balance of the Micro Manouche. It has both an adjustable coil with steel polepieces as well as Krivo's proprietary "compensated lateral blade" design to create the perfect pickup. Also features a brand-new 14" radiused top!

The Micro-PAF humbucker is very clean and flattering pickup with lots of output. This pickup provides a warm yet clear sound with a very sweet midrange. Great for archtop jazz guitars, slide guitar, acoustic guitar, parlor guitar—and more! A mere 7mm thick at the apex of the radius: the Micro-PAF installs and removes in seconds and requires no modification to your guitar.
​
Can't decide which Krivo pickup to buy? It's easy: if you use phosphor bronze or Monel™ strings choose my micro-manouche pickup which is the exact same pickup as the Micro-PAF Humbucker but engineered for optimal string balance without the need for separate adjustment screws. If you use nickel, stainless, flatwounds or any typical "electric" string then choose the Micro-PAF Humbucker.

​ Additionally, the Micro-Manouche is best if you want a more "acoustic" sound whilst the Micro-PAF is better for a warmer "Jazzier" more electric sound.
View